A lighting stand from a coat rack

Being showered with grace and favour from bonsai outlets is an alien experience, because I see no need to spend money wantonly. I much prefer to make or modify items that are required. And of course this includes making my own soil compositions, which many bonsai enthusiasts are apt to do. This is a practice of being frugal, saving money that can be spent on other needed items.

My present lighting stand (Discussed in the article lighting for bonsai) is still in use, but as more stock has been acquired a new stand was needed, one with a width of 1.75 metres with adjustable height.

To make such a stand, I gave the idea much thought using materials such as wood and/or metal. But the main problem was the weight factor of the full spectrum lighting device (5kg.) A wooden rail to hang the lighting device would eventually sag or bow therefore to prevent this from happening the materials would have to be robust, making the stand bulky and ugly. Moreover, the cost of materials could exceed the budget allowed (€20,00) and as this site is all about simplification, an alternative solution had to be found.

One of the local supermarkets had adjustable coat racks for sale at just under €20,00. But they were flimsy, the metal pipes were thin-walled and the one on display had indentations where the locking devices had been too tight. It was big and ugly, but what interested me was the hard plastic attachments that held the rack together. Looking on the internet for these was time-consuming and most were either too big or too small in diameter so no luck there.

Visiting another hardware store looking for a large plastic drainage tray one was found, its purpose is to go into the boot of a car for wet or muddy footwear price (€2,95) The width, depth and length suited my requirements and being the only one left on the shelf it was quickly snapped up. I also noticed a pile of boxes and on investigation found that they were coat racks. These were better quality, the tubing diameter was smaller with thicker walls and on examination, I found that the rack when assembled would be strong enough to take the weight of my lighting device after a slight modification. (Shown below)

The top rail has two inner tubes which can be turned to unlock and pulled out then turned to lock in place giving an overall width of 155cm which is ample for those wanting to attach grow lights. As my lighting device is hung from the centre it was a simple matter of pulling out the two inner tubes to drill 2 holes and insert 2 eye or ring bolts from which, the device could be suspended. The tubes were then pushed back in as far as they could go then locked into place. 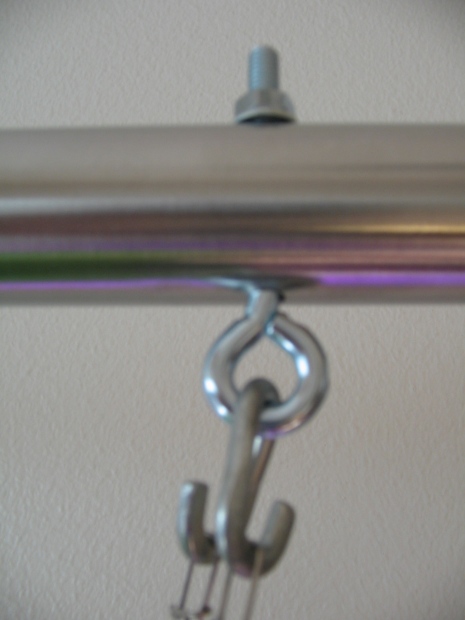 The side stands also have 2 inner tubes with hard plastic collars that lock them into place when the top rail is extended. At ground level 2 stands are supplied into which 2 horizontal stabilising bars are fitted. This coat rack also come with a set of wheels for manoeuverability, but as my stand is placed on a bench, they were surplus to requirement and discarded. The stand has now been in place for 8 weeks now and no problems including sagging have occurred.

The cost of the coat rack was €16,99 item number is 47798 and can be obtained from the Swedish company ‘Biltema’ as was the plastic drip tray item number 47466. Biltema outlets in this part of the world are quite common, but for those in other parts where Bitema is not available, they can be found on www.biltema.com

Although making items from scratch can be rewarding in many ways, sometimes it is cost-effective to buy such and simply modify them to suit one’s needs. Until next time (approximately 2 weeks) when we discuss new potential bonsai material, BW. N.