In part 2 ‘A’ we discussed when to wire both coniferous, deciduous and young trees grown from seed in their first year. Other topics were the techniques to bend heavy branches including ‘V’ notching and what happens to the xylem when severe compression and tension are applied. In this discussion we look at an actual wiring project.

When attempting to wire any part of a tree it is advisable to test the resistance of the section in question, because this gives an approximation of what gauge to use. This is achieved by supporting the tree at the base then gently bending it to the right, left, forward and back for a few minutes thus, making the xylem more pliable. The wire is wound around the branch (not the branch around the wire) normally at a 45° angle starting from the bottom going upwards. However, all trees are different some grow quicker than others hence the wire coils may be closer or further apart depending on what one is trying to achieve. The image shown below is an example of how a tree can be wired.

Trees that are 3 to 4 years will have lignified and the heartwood will have hardened, thus bending requires a little more thought and preparation. The candidate for this experiment has a diameter of approximately 15mm at soil level, a 7/8mm diameter tip or apex and is approximately 150cm in height, which would be normal for a deciduous sapling of this age, but for our purposes it has been reduced to 24cm.

The sample tree (below) is uninteresting due to the lack of movement therefore, we are going to apply bends to the right, left, to the back and front and fan out the branches so that they will eventually come close to the trunk to give a 3D appearance. (the 3 small grey squares represent back branches that will be reconfigured later)

No doubt the critics will say this directive is incorrect, branches should not be near the trunk as it mars the viewer’s eyeline taking away the emphasis of the trunk which is considered the most important factor in bonsai. Nonetheless, the argument here is between something that has a look of realism as opposed to one of reality.

To explain further after the Chinese introduced the art of bonsai (originally named Penjing also known as Penzai) to the Japanese in the 7th century, the latter produced specimens in their own style. (Zen buddhist) Where focus of attention was centred on a tree’s trunk and branches were not permitted to cross it, but this created a flat 2D image unacceptable to western bonsai enthusiasts because it did not represent reality. A tree as it grows will produce branches radiating the entire circumference; a natural phenomenon.

Furthermore, the American horticulturist, teacher, author, and master bonsai cultivator John Yoshio Naka considered to be the founding father of western style bonsai stated that in order to create a natural look as would be found in nature,”don’t turn your tree into a bonsai – turn your bonsai into a tree.”

Our specimen tree has undergone the flexibility test and has been securely wired starting with the heaviest gauge then moving down through the sizes as we work up the tree. The gauges used are shown below.

The following image a rough drawn sketch gives an indication of how the specimen would appear after the wiring process is completed showing the back branches marked as ‘Bb’. All the fine branches were wired using 1.5mm and 1mm gauge accordingly. 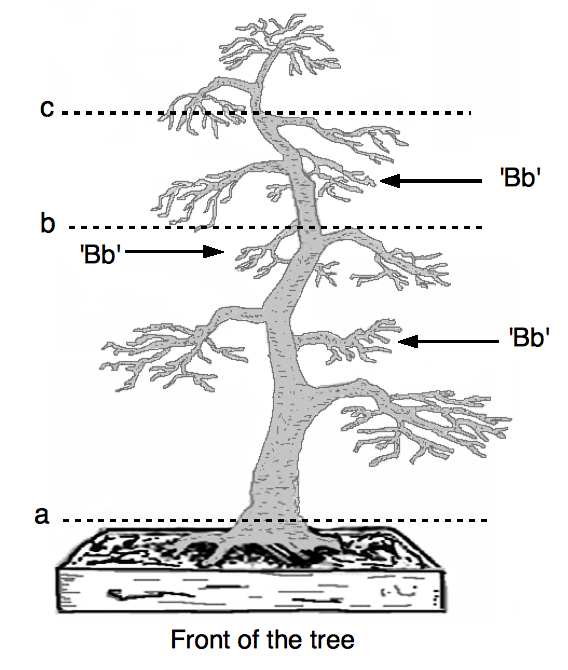 To create a natural look the branches were bent down to give the impression of age and the thinner branches fanned out and levelled to enhance the foliage. At this stage the trunk is still visible (a to b) however, as the tree grows and develops more shoots and leaves, these will come across the trunk, (c) and at the apex the trunk will hardly be visible.

This example is for a deciduous tree that arguably have straighter trunks often with gentle curves, but there are exceptions as in ‘wind swept’ (Fukinagashi) ‘twin trunk’ (Sokan) ‘multiple trunk’ (Kabudachi) or even Literati (Bunjingi) styles. But regardless of the species, the wiring process is the same, the only major difference is that deciduous are wired in the autumn after leaf fall when it is easier to visualise shape and form; whereas conifers being ‘evergreen’ require more patience when wiring to avoid trapping the needles.

Many trees 8 years and upwards can be found in some unusual places including, derelict industrial sites, garden hedgerows as well as from the wild. Many will have interesting forms that have been shaped by the forces of nature, the only task remaining is pruning and wiring the branches.

However, if a potential specimen is found with a 4 to 6cm diameter trunk at ground level, its height will probably be in excess of 2m and applying bends using the heaviest gauge wire (6mm) is extremely difficult, especially if the tree is deciduous because of the denseness of the cellular structure. The only way to create shape (referred to as movement) is to use the techniques mentioned earlier ‘V’ notching etc, but there is an easier approach achieved by reducing the tree’s height to a node or bud that when grows will form the new apex.

The tree pictured above is a twin trunk (Sokan) rowan or mountain ash Sorbus aucuparia rescued from a derelict industrial site due for refurbishment, its original height was over 2m but reduced to 70cm allowing new leaders (1 for each trunk) to grow; height now is 90cm. In spring the branches will be pruned back to encourage new growth. (The temporary padded block of wood ‘green circle’ is to keep the two trunks separated, a new clamp is being designed to facilitate this purpose)

As stated before conifers have more flexibility and can be wired once the proposed section has been tested, if the area once wired fails to hold its shape even after applying the heavy bending technique shown below we can resort to using guy wires as opposed to ‘V’ notching or other applications.

But when using guy wires we have to remember that creating a force in one direction leads to an opposing force, in part one of this article there is an image of a Scots pine and to save you time looking for it, it is repeated below. 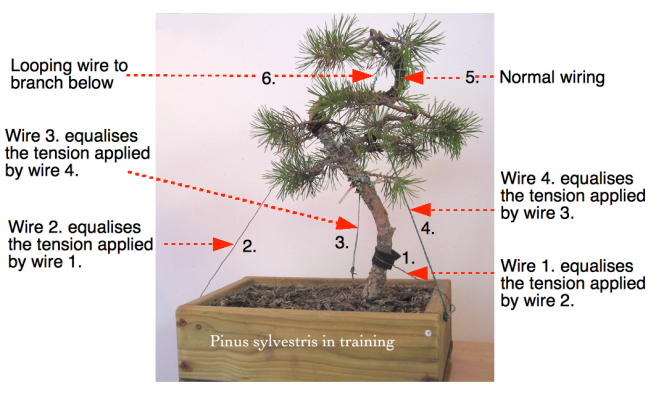 This ‘goose neck’ pine has 4 main guy wires attached to both tree and box equalising the tension applied, the top section 5. has been wired in the normal way, but is held down with looping wire 6. to the branch below. The black patches are pieces of felt used to protect the bark from the wire.

Wiring trees can be easy or complicated depending on your approach, the task itself regardless of size just requires a little fore thought and patience. Because at the end of the day it is you who must be satisfied; you are the artist. Until next time when part III of this article (new wire as opposed to reclaimed) is published. BW, N.

One thought on “Wiring practices (Part II B)”