Learned bonsai practitioners have their own approach to wiring and regardless of the implementation, it will conform to the ascetics of bonsai. But for the beginner wiring trees can be discerning due to the mistakes often made – errors that are difficult to rectify, thus questions continue to arise.

Arguably the best way to educate those new to the art is via actual wiring demonstrations, but this is not always possible especially if a bonsai workshop where one can attend is not in your area. Hence, they resort to online research to find the required information, which in many cases is not comprehensive in its entirety.

This web site (taigabonzai.com) does contain articles on this subject for example, (‘Styling, Wiring and Pruning’ posted March 20th 2016) and (‘The problems with bending or shaping’ posted January 2nd 2017). Nevertheless, those new to this ‘living art’ have yet to conduct adequate research to find the answers they are seeking. In truth, there is a wealth of information available in text form and in audio visual, it just takes time to read or view.

Arguably, part of the problem is that the beginner eager to get started fails to comprehend the needs of a particular specimen. This article (in three parts) will give a more in depth explanation on the problems when wiring, but first in order to know where we are going we have to know from whence we came; understanding basic horticulture and arboriculture.

The first factor we should consider are climate zones as these have great bearing on how plants react to changes in temperature for example, Northern Europe (Scandinavia). Here temperatures vary from −6°c to −30°c during December, January and February although in recent years they have risen to an average of −6°c to −15°c due to climate change. Summers can be from +10°c to +30°c thus, the range is quite extensive and all endemic flora are adaptable to these changes. This consensus would apply to countries found in the southern hemisphere; New Zealand and Argentina.

Europe (Oceanic) is milder due to the Gulf Steam’s influence making it milder and wetter in comparison to other areas of the same latitude around the world. Winters are milder and summers are cooler with temperatures ranging from 0ºc to +8°c and +22ºc to +24°c respectively and most flora can withstand the variation. But there are instances where extremes to weather patterns abound; the most damaging is sudden severe frost.

In the Mediterranean region (a temperate zone) generally speaking, temperatures average from 3ºc to 13ºc in the coldest months to 20ºc to 25ºc in the warmer months. But as stated the worlds climate is changing, thus the temperatures given for the 3 climate zones are only an approximation. Nonetheless, in the Mediterranean flora is not subjected to extreme variations hence, many species retain their foliage throughout the seasons.

Common species endemic to this region and used in bonsai include, Citrus sp. (Orange & Lemon), Punica granatum (Pomegranate), Ginkgo biloba (Maidenhair tree) and varieties of Ficus. These species if kept in colder climes can be placed outside during the summer months (June, July & August) but, are returned to warm environments during the colder months.

However, it should be noted that these species can lose their foliage once returned to an indoor environment, the reason for this phenomenon is the change from an outdoor temperature fluctuation to one that is constant, but they do re-foliate in 2 to 3 weeks.

Researching your tree or shrub’s attributes and well being is important regardless if taken from the wild, store bought, cultivated from a cutting, grafted or from seed, it pays to gain the knowledge. Because this basic information is the learning curve for the further development of your potential specimen/s.

The second factor is the type of tree coniferous or deciduous the former an ‘evergreen’ with permanent foliage and the latter a deciduous a broad flat leaf tree that sheds it’s leaves in autumn, hence the two distinct forms. But there are a few exceptions to this rule where a species can be both coniferous and deciduous for example, the larch and tamarack Larix spp. and the pond cypress Taxodium ascend which do have cones and needles but shed them each year and these are known as deciduous conifers.

Both coniferous and deciduous trees can be defined either as softwood or hardwood, softwoods (coniferous) cedar, cypress, juniper, larch, kauri, pine, spruce and yew have extreme flexibility and are predominantly used in construction. Whereas hardwood (deciduous) apple, beech, cumaru, hickory, maple, oak, teak and walnut have dense cellular structures hence they are less flexible. These hardwoods have many uses including furniture, axe handles, butcher’s blocks and decking for boats.

Conifers can be shaped relatively easily for example, a Scots pine Pinus sylvestris having a 3cm trunk can be gradually coxed into a desired position. However, the wiring used be they guy wires or that which is applied to the appropriate section must stay in place for some considerable time (3 years or more) to allow the tree to conform to its new shape as shown below. 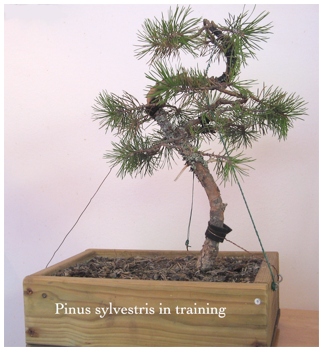 Deciduous can be problematic for example, a Japanese maple with a 1cm trunk will more than likely break because of it’s dense cellular structure, hence hardwood species are normally wired into some form of design in their first year of growth and as soon as the plant conforms to the new shape, which can happen in a short space of time (3 to 6 weeks) the wire is then removed.

The image below is the remains of a Japanese maple used for air-layering, what is left is a reduced stump 1cm diameter (white arrow) and a branch on the left (yellow arrow) which has been loosely wired to create movement and will become the new trunk. The gauge of wire is 2mm with the branch being the same in diameter, using a heavier gauge wire has 2 purposes, (a) it does not create indentations in the bark and (b) it can be left on for a longer period. The foliage bottom right is sacrificial but left to grow to allow the trunk to gain girth. 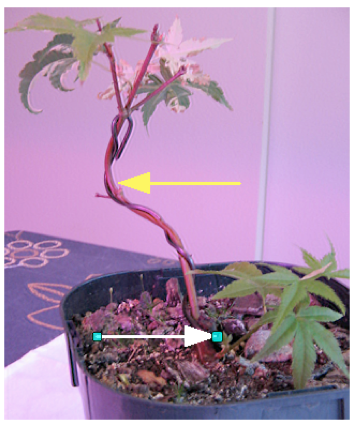 In part 2 the discussion will continue with images and explanations on bending and shaping, the various methods used, how to pre-stress a branch or limb and when and how to wire. Until next time, B.W, N.