Many years ago, I interviewed an elderly gentleman for an article on preservation and on meeting him, he was busy in his workshop straightening a pile of nails. I enquired as to why he was doing this, his reply was “There are 2 reasons why I do this, a) because the nails can be used again it’s recycling which saves money and b) it keeps my mind active and hands busy.” The old gentleman’s viewpoint has stayed with me ever since and I try to adopt the same directive reusing items for other purposes.

Now to the question: “Is there a connection between a microwave oven and bonsai?”

Probably the first reaction to the question is “What is this person talking about, how can there be a connection, they are worlds apart.” But if you read on you will see that a connection between these two entities does exist.

What is the most used item for styling a tree, it is ‘wire’ – aluminium for deciduous and the more expensive copper for conifers. Such wire is usually imported from the far east via bonsai outlets in the west and sold by gauge (in increments) 1mm to 6mm and weight for example, 50g or 100g packs.

As we are aware wire in various thicknesses is required to create branch bending in order to maintain the desired shape. With small gauge wire (1 to 1.5 mm) there is a substantial amount in one package (50g) that can last a long time, but as the gauge increases the length decreases. Moreover, the initial cost of purchasing a large selection of wire and delivery can be expensive depending on the supplier.

If one is a trader in bonsai or an instructor the cost of wire usage can usually be passed onto the customer or club where workshops take place, but for the novice/student or solo artist offsetting the cost cannot be done. Some of my students whom are extremely enthusiastic are as poor as church mice and denying them access to my wire stock, is a set back in their learning curve; hence a way had be found to accommodate their needs.

The solution came a few weeks ago when my microwave oven decided to retire, it was moved to the workshop in the hope that a repair could be facilitated. But after doing some research the advice given was “do not under any circumstances tamper with a microwave oven”. Because it has (1) a high voltage capacitor which can give very nasty surprises and (2) a magnetron, which has cancer causing beryllium oxide coatings if damaged. Nonetheless, having an inquisitive mind I took the the appliance apart to see how it worked.

Inside the microwave is (3) a transformer with two large coils of reusable wire, which can be either all copper or a mixture of copper and aluminium, depending on the make, model and age. 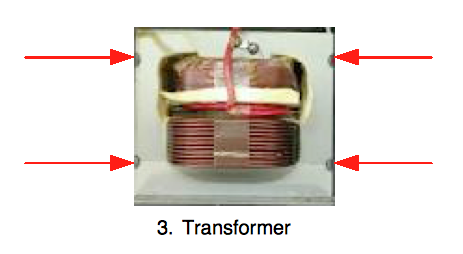 These transformers are comprised of several heavy steel sections held together by seams that run the length of the transformer indicated by the red arrows, these need to be separated and to do this the tools required are a hammer and bolster or masonry chisel.

Put the transformer on a flat hard surface seam side facing up and break them, the transformer will come apart, tap out the steel sections that go through the coils, then separate the coils and clean them of any unwanted debris.

You now have wire that you can use for bonsai which at most will have cost you 30 minutes from stripping out to wire retrieval. There is other copper wire in a microwave but it is either too thin or braided to be of any use in bonsai. Of course a microwave oven is not the only source for wire, other electrical appliances a washing machine, dishwasher, refrigerator or air conditioner have transformers containing wire coils.

Another wire source is industrial electrical cable often coated in a polymer insulation which has to be removed, achieved either by manually stripping the cables through a jig or burnt off. But the latter causes problems because a) the coating produces smoke which contains halogens, dioxins and carbon monoxide that are hazardous to health. b) The wire has to be cleaned of any burnt residue and if copper, it may need to be re-annealed to make it pliable for use.

The microwave project was undertaken purely reclaim the copper/aluminium wire so that it could be used by my students during bonsai workshops, thus saving money and my own personal stock of wire. If you wish to try dismantling a microwave or other electrical appliance for its wire content, I urge you to err on the side of caution use gloves, face protection and tools that are insulated – be safe not sorry. Until next time, BW, N.

In the article ‘A teaspoon of vinegar’, a brief discussion focussed on the differences between rain water predominantly acid and what comes out of the household tap; a chemical cocktail and its effect on bonsai trees and shrubs. Hence it might be prudent to have a brief review of the chemicals found in rain and tap water.

RAIN WATER: having a pH range of 5 to 6 contains many types of nutrients and is free of salts and other harmful elements and although it absorbs atmospheric gases, it remains pure until it comes into contact with the soil. Thus, rain water becomes contaminated due to the chemicals and pollutants that are present. The major causes of this phenomena include factories, power plants, automobiles and low-flying military aircraft the latter a significant contributor to the damage of trees.

Such chemicals that include, sulphur dioxide (SO2) and nitric oxide (NOx) become acids when they enter the air and react with water vapour. The result is sulphuric acid (H2SO4) and nitric acid (HNO3) which, can alter the pH range making it more acidic – a pH range of 3-4 for example. However, some tree species thrive in acidic conditions, Beech, Dogwood, Willow oak, Magnolia, Azalea, Holly, Birch, Pines and Rhododendrons as their soil conditions from where they originate are predominantly ericaceous. (acidic)

TAP WATER: with a pH range of 6.5 to 8.5 (depending on your particular region) contains various chemicals some thought to be beneficial, but series of tests conducted in recent times have cast doubt on this perspective for example. Fluoride (F) in drinking water began back in the 1940’s to assist in reducing tooth decay, but fluoride is a neurotoxin and endocrine disruptor, able to damage the thyroid gland, calcify the pineal gland and interfere with bone formation. The toxicity of fluoride is quite high and because of the risk to health many countries have banned water fluoridation.

Chlorine (CI): is a strong disinfectant added to drinking water as a purification technique, it is a reactive chemical that bonds with water, including the water in the stomach that produces poisonous hydrochloric acid. Excessive exposure to chlorine can cause cell damage and respiratory problems. Nevertheless, water companies continue to use it despite not being completely safe.

Other chemicals found in tap water are mercury (Hg) – a naturally occurring element usually a bi-product of mining and industrial practises. Arsenic (As) is used in a multitude of industrial processes and if improper disposal is not taken care of, environmental contamination is the result.

Lead (Pb) is a major toxin that still exists due to corroded piping systems and is extremely toxic especially to humans. PCBs or polychlorinated biphenyls, are chemicals used for industrial purposes such as insulation, machinery, oil, paints, adhesives, electronics and fluorescent lights. In 1979 PCBs were banned but, they are still found in land-fill sites where they continue to break down and pollute the environment.

In addition, other chemicals found in water supplies include, Perchlorate, (CI04) HCB or Pentachlorophenol (C6) and DDT (C14H9Cl5) (Dichloride-Phenyl-Trichloroethane) and all have detrimental effects to some degree. As do modern insecticides and herbicides including Glyphosate which, are highly toxic and a cause for concern as they break down in the soil and are transported to other areas via rain fall and by the wind.

VINEGAR: is an aqueous solution of acetic acid combined with other trace elements and is the result of a fermentation process using ethanol, various sugars and acetic acid bacteria. Some types of vinegar contain up to 20% acetic acid, but these are strictly for agricultural or cleaning purposes and not intended for human consumption.

Normal vinegar regardless of its colour or flavouring contains 4 to 7% acetic acid and 93 to 96% water and can be used in bonsai to counteract the chemical effects of tap water. The recommended dose to attain a pH range of 5 to 6 is 1 level teaspoon (1 ml) to 7 litres of water. After a period of time, the container will discolour with black streaks and sediment, this is the residue of acetic acid combatting the chemicals as shown below; but keep the container away from children and pets and do not consume. 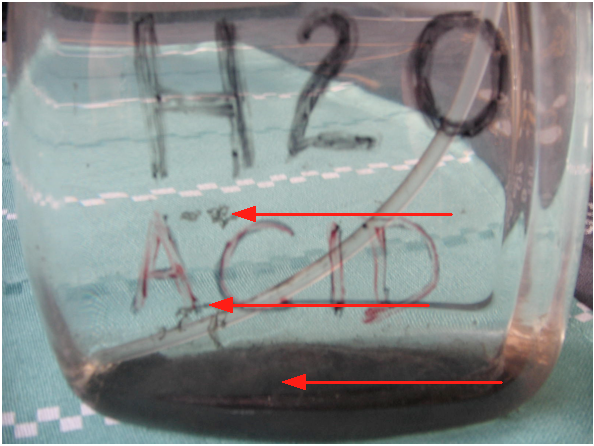 Soil pH: in nature one can find areas where a variety of species both coniferous and deciduous grow together with some in close proximity and within this area the pH can change. This variation is due to a species leaf shed for example, the ground underneath conifers will be strewn with needles, which break down giving acidity to the soil, thus reducing the pH. Alternatively deciduous leaves decompose allowing the nutrients previously tied up in the leaves to be slowly released back into the soil where they can be reused, hence the pH rises.

There exist many soil types each having their own properties which, can be categorised into 3 sections; ericaceous (acidic) pH 3 to 6, neutral pH 6 to 7.5 and alkaline pH 7.5 to 8.5. Each soil type has their own type of living organisms classed as Acidophiles, Neutrophiles and Alkaliphiles respectively. Such organisms include archaea, bacteria, actinomycetes, fungi, algae, protozoa, and a wide range of insects; mites, nematodes, earthworms and ants. These consume, digest, and cycle nutrients all of which are important to the vitality of a soil composition.

Once the origin of your particular species has been established whether tropical, temperate or northern hemisphere, it is relatively simple to determine the pH range required by the plant. To assist you in this go to the Articles ‘The pH factor’ parts 1& 2 posted in April 2017 where you will find a chart showing the pH range for most bonsai species. In addition, there is a comprehensive description on soils and their composition.

DOES VINEGAR WORK?: in the article ‘The Colourful Maple‘ (September 3, 2017) my A. palmatum amoenum and the red spider mite Tetranychidae urticae was discussed. The plant was brought inside and placed under full spectrum light, but the change in temperature caused the plant to leaf-drop; new buds appeared but would not break into leaf. With the danger of frost over (May) the plant was moved outside where it was subjected to rain fall, in June the buds had broken and by July it was growing vigourously.

After some research, it was concluded that tap water is detrimental to a tree’s health and vitality, since then all my trees are given the vinegar solution; although the dosage is either reduced (half a teaspoon to 7 litres of water) or increased (1 and a half to 7 litres of water) depending on the species.

Further evidence to confirm this perception is with the Abies procera glauca prostrata or ‘Noble Fir’. This conifer requires acidic conditions in order to survive, it cannot tolerate water with a high pH. One of my students has this species and when it was given tap water, the needles turned brown; a sign of ill health. He now uses the vinegar solution.

Rain water is soft with a pH of 5 to 6 – suitable for most plants, if you have the means to collect it then there is no problem, but if not, you have to find a way to make hard tap water soft therefore, the suggestion is ‘A teaspoon of vinegar’ . Until next time, BW, N.