As stated in the article posted August 3rd 2017 now is the time when the local nurseries or garden centres start selling their stock at reduced prices and thus many bargains can be had quite cheaply. Although a proportion of trees and shrubs will show signs of fatigue, hidden amongst them one can find some good specimens for example, the White spruce Picea abies (syn alba) discussed in the last post August 6th 2017. Here is another specimen a Ginkgo biloba commonly known as the ‘Maiden hair’ tree or 白果 (bái guǒ), ‘white fruit’, and 銀杏 (yínxìng), or ‘silver apricot’. Original price 35€ sale price 17,50€. 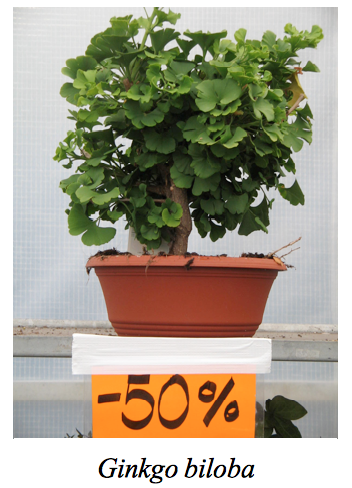 Hidden in this mass of foliage somewhere there is a potential bonsai waiting to reveal itself – I just had to find it. But first my apologies I forgot to video the work nonetheless, here is a written explanation of the process, which should suffice.

Removing some of the foliage exposed a twin trunk of equal height in a ‘Y’ formation, but the composition seemed unbalanced because one trunk was thinner than the other. To retain movement and perspective, the thinner trunk was cut back to a stump to add character rather than remove it entirely. The main reason being is that Ginkgo do not heal wounds like most deciduous broad leaf species the scars are always visible. The stump’s bark and cambium was removed and the bare wood treated with a water based black dye and lime sulphur to create a burnt silvery appearance. The long, straight, thick inner branches were cut back because wiring was impossible however, wire could be used on the leading shoot at the apex and thus was loosely wired into position.

The tree was removed from the pot to check the root ball condition, 30% of the roots were trimmed back, the old soil was replaced with a sand and grit based loam, then repotted in the same pot slanting to the right to create movement. The whole process including cleaning, re-potting, pruning and wiring took approximately 2.5 hours. The cuttings were saved and treated with rooting hormone powder and planted in the same soil composition as the main tree. These will be cultivated and then given away to other bonsai enthusiasts. 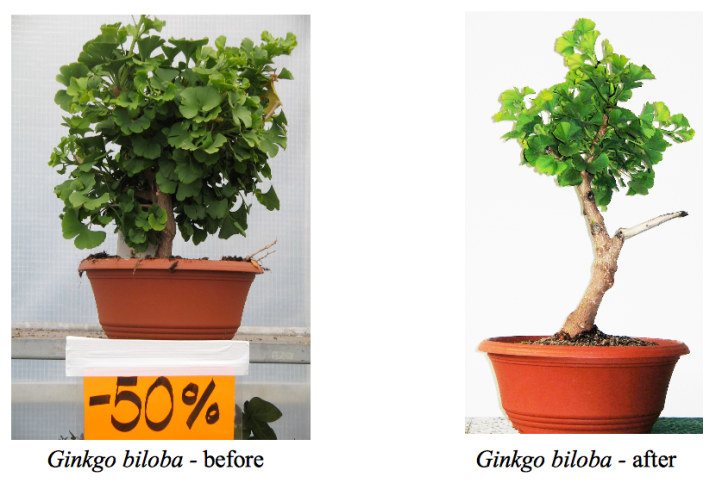 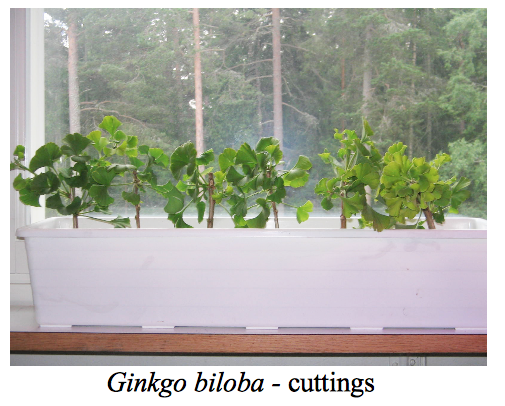 G. biloba is the only living species in the division Ginkgophyta, all others being extinct and is one of the best-known examples of a living fossil, dating back 270 million years. G. biloba are dioecious meaning some trees are male and some female. Male trees produce small pollen cones each bearing two microsporangia spirally arranged around a central axis. Female plants do not produce cones, instead two ovules are formed at the end of a stalk and develop into seeds after pollination. These seeds approximately 1.5–2 cm long have a soft fleshy light yellow-brown outer layer called the sarcotesta, which although attractive to the eye, contains butyric acid that has the odour of vomit.

But arguably what makes this species an attraction in bonsai are its leaves, that are unique among seed producing plants. They are fan-shaped with veins radiating out into the leaf blade, sometimes splitting, but never cross connecting to form a network. They are a vivid green during the growing season turning to a deep saffron yellow in autumn. A good bargain and well worth the time and effort, until next time take care BW, N.