This post is probably not the most exciting of topics to discuss, but we should be mindful of the pests and diseases affecting bonsai especially those, which cannot tolerate cold conditions and are kept inside. All flora are susceptible to attack from pests and diseases whether grown naturally or cultivated. In an attempt to eradicate these unwanted problems most fruiting and flowering specimens are sprayed with a fungicide or repellant. Chemical protection does in many respects produce the results intended, but some will argue that it also destroys those creatures that eradicate the unwanted. Moreover, it can be said that when winter arrives many pests will die due to loss of foliage and the coming cold.

Nonetheless, there are such pests whom are able to survive via hibernation hidden beneath a tree’s bark or in it’s seed pods. For example, the Oak – genus Quercus, a favourite of the Tortricid Moth caterpillar – Family Tortricidae that destroys acorns. Carpenter Ants – Genus Camponotus hibernates under pine tree bark. The spruce beetle, Dendroctonus rufipennis its larvae bores into the phloem of conifers and feeds on the live tissue. And the Asian longhorn beetle Anoplophora glabripennis a native of China and the Korean peninsula excavates 1cm diameter holes in the main trunk causing sap bleeding. Eventually the affected tree dies.

The above mentioned pests and diseases are but a few of the many that exist around the world, attacking many species of tree both deciduous and coniferous. Arguably such devastation is due to climate change and infestation via unwanted importation of packaging material. For example wooden boxes and crates and although authorities do much to enforce regulations, it is difficult to halt the invasion.

With bonsai that must be kept away from cold conditions either pre- (trees in training) or established, they too are susceptible to pests and disease. We like to assume that our indoor environment is free from miniature beast invasion – nothing could be further from the truth. The ‘greenhouse’ or home is riddled with the little monsters and no matter how vigilant we are, eradication is virtually impossible. Arguably, the cause why these mini beasts are able to thrive successfully is due to the temperate conditions abundance of food and water.

In the article ‘New material for bonsai part I’ a paragraph discussing the Red Spider Mite was given including an image depicting its appearance. As stated, evidence of these microscopic arachnids existence was revealed due to their very fine webs, which allow them to roam at will. Getting rid of these unwanted pests is in itself a difficult task. But can be achieved using horticultural sprays and soaps. Other common pests causing disease are described as follows.

Mealybugs – quite visible to the naked eye are related to scale insects and congregate on leaf joints and the undersides of leaves. They damage plants by sap sucking, which causes the leaves to wilt, turn yellow to brown and eventually fall from the plant.Removal of this pest(s) can be achieved either by spraying them with water or via a chemical spray designed for Aphid treatment. The plant then should be isolated from others until the treatment is successful and the plant has recovered. 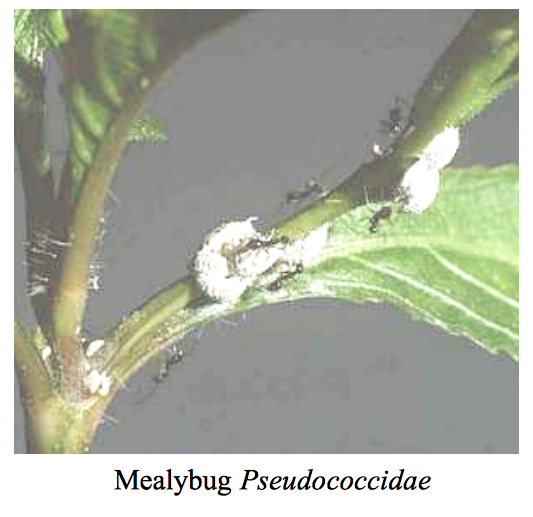 Aphids – normally a pale green in colour can be found in other shades such as grey and black. Having arrived on a plant their numbers rapidly increase infesting the plant in great hordes with a preference for the underside of leaves. As with the Mealy bug they also suck the sap from the leaves and if not removed quickly, the plant may become infected by disease and viruses. Aphids can be removed relatively easily by the use of warm soapy water directly sprayed on them. Alternatively a chemical application designed for this pest can be used, but the plant should be isolated until the treatment is completed and the plant is free from infection.

Scale Insect – there are more than 25 species of these limpet-like creatures, which makes identification difficult due to their well camouflaged appearance. They devastate a wide variety of plants by sucking the sap and as a result the plant is severely weakened distorting growth. Evidence of their existence can be seen as the growth of black, sooty moulds and or a sticky substance (honeydew) on foliage. Another sign of scale infestation is leaf blemish. Scales have hard shells and removal can be difficult hence the use of chemical application such as an Aphid spray, which softens the shell eventually killing them. The plant has to be isolated until the treatment is successful.

Sawfly Craesus septentrionalis – can be a real nuisance for those including myself whom have Betula species (Birch) as bonsai specimens because, the tender young leaves are prone to be ravaged by the Sawfly larvae running rampant all over the tree. As do the larvae of a large number of species of butterflies, moths and other insects. Female sawflies are so called because of the saw-like appendage at the tip of their bodies, which is used to cut slits into the leaves where the eggs are laid. There are different species of sawfly and the damage cause by their larvae is peculiar to each species for example. Some will leave notches or holes in leaves or devour the leaf leaving just its skeleton, others spin webs, leave galls and some will roll up a leaf completely. Sawfly are commonly found in bonsai for example. Conifer sawflies that feed on needles and bore into buds and shoots. Salix (Willow) the sawfly leaves distinctive red/brown galls, fruit and flowering – Prunus, (Cherry) Pyrus, (Pear) and Malus (Apple) are all affected by the sawfly.

The most common way to eradicate sawfly larvae is either removal manually or by using a horticultural soap as used for Aphids and Mealybugs, but the plant should be isolated so as not to infect others and to allow for the treatment to work.

Sciarid flies often called Dark-winged fungus gnats – are commonly found in moist environments including areas where house plants are situated. They thrive on damp soil conditions and can be seen scurrying over the soil, flying around and landing on stems, branches and leaves. Although they are known to be a pest in mushroom horticulture, they present no threat to bonsai plants nonetheless, they can be extremely irritating especially in a home environment. This large Diptera genus is one of the least studied mainly due to its small size 2mm and the difficulty in specific identification. It is said that more than 1,700 species have been described with an estimated 20,000 awaiting further study. 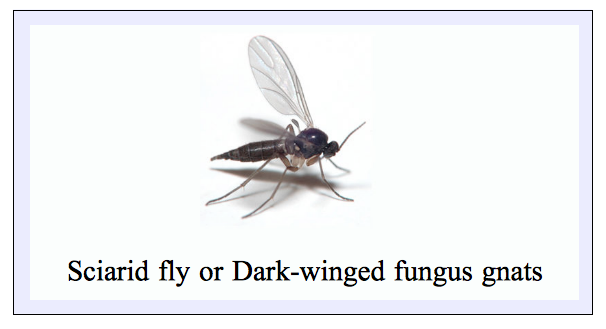 Springtails – Collembola form the largest of the three lineages of modern hexapods the other two being Protura and Diplura these creatures are not classed as insects, because they are omnivores having internal mouth parts. They are small white or grey in colour and feed off the soil’s dead organic matter. When plants are watered and springtails are present, they are agitated and move rapidly and look unsightly. Springtails pose no threat to bonsai or other house plants, it is their very presence which can be irritating. If the desire is to eradicate these creatures, one can water the plants from the bottom by immersing the container in water and/or reduce the amount of water. But water reduction may not be conducive to some plant species, hence a careful balance should be maintained.

The above mentioned pests and diseases are common to bonsai horticulture, they are but a few of the many thousands that are in existence and to further research them would involve eons of time. Nevertheless, over the past decades horticulturists and scientists have done much of the spade-work hence it is not that difficult to find the answer one is looking for a particular problem. But it pays to be vigilant and inspect your bonsai specimens on a regular basis to ensure they remain in a healthy condition. As the old saying goes – ‘Prevention is better than cure’.

Another factor to consider is the soil composition, because bonsai are confined to a relatively small quantity of soil and this growing medium has to fulfill its needs. It must be able to retain water yet have good drainage and have the ability to allow for air circulation, without this basic criteria the tree will suffer. Soil contains a multitude of living organisms that consume, digest, and cycle nutrients. These living organisms include archaea, bacteria, actinomycetes, fungi, algae, protozoa, and a wide range of insects for example. Mites, nematodes, earthworms and ants all of which are important to the vitality of a soil composition.

Soil in a bonsai pot does not last indefinitely, it decays over a period of time due to the deterioration of living organisms and once expired it is unable to support the tree in order to sustain health and growth. This is when the tree is most vulnerable and attack from pests and disease can quickly take hold. Having said this one may think that a bonsai has to be re-potted every year – not only is this a misconception, it is unnecessary. A tree in a pot or container planted in year one will take at least 2 to 4 years to establish itself although much depends on the species and its growth rate. This can be assessed by teasing the tree out from its container and checking the root ball. If the roots are densely packed with little soil in situ, then it will probably need re-potting alternatively if what is seen is the opposite, then it can be re-placed and left for another season.

For example, one may think that this 13 year old Cotoneaster Lucidus (23cm) planted in a shallow pot (3.5cm x 22cm) would have a substantial root ball and become ‘pot-bound’ after one season. But this specimen is not a prolific grower either above or below the soil level nonetheless, it is inspected bi-annually in the spring. If there is room for the roots to develop it is returned to the pot unmolested and left to grow, but will be fed on a regular basis to ensure the nutrient up-keep. Root pruning and soil change will take place either in year 3 or 4. The next article ‘The need for stratification’ will probably be posted on 29th of January. Until next time BW, N.