It can be said that many species of tree have interesting characteristics, be they coniferous or deciduous and their miniature counterparts (bonsai) can have awe-inspiring appearances given time, patience and care. Perhaps one species not as common in comparison with the most popular varieties found in the average bonsai collection is the Maple. But having said this, there are some bonsai enthusiasts who only collect maples and arguably what makes the Acer quite spectacular are the colours, which are displayed throughout the seasons as shown below.

The Maple a deciduous tree or shrub belongs to the genus Acer of which, there are approximately 128 species. Most are native to Asia, but some varieties are also appearing in Europe, North Africa, and North America. However, the Acer although not that difficult to cultivate are susceptible to leaf attack by Lepidoptera – Moths and Aphids that feed on the sap. The Acer is also affected by a number of fungal diseases, which include Verticillium, ‘Sooty bark disease’ and Rhytisma a species of fungi. These attacks by various unwanted pests can kill the plants or leave them badly disfigured giving a rather ugly appearance. In September this year (2016) another pest was discovered the ‘Red Spider Mite’. Tetranychus urticae (shown below) 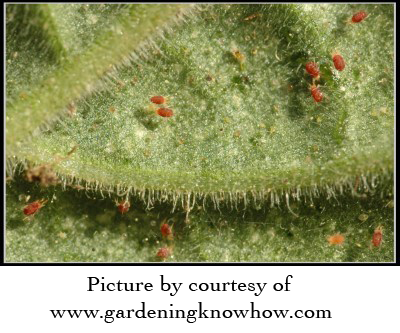 Red spider mites are arachnids related to all spider species and are common in glass houses and on house plants of over 200 varieties. These creatures start life with six legs, but develop eight as they mature. They are light green with two dark spots on their back, but when they become inactive they change to dark orange or red. They are quite small to the naked eye and if gone unnoticed can quickly devastate a plant.

The image below depicts an (Acer palmatum – amoenum) commonly known as ‘Firecracker’, which was in the process of being air-layered (Aluminium foil area) and was attacked by Red spider mite. 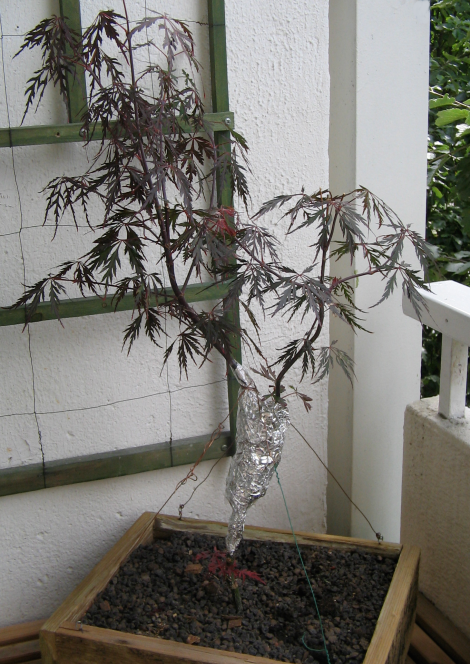 These arachnids had spun a very fine silky web over the leaf canopy (left side of the plant) and were in the process of destroying the right side. Thus, quick action was required and the whole plant was sprayed with insecticide.

As a result, the plant lost all its foliage and looked as if it was doomed. Checking the air-layered section the new roots had turned dark brown when they should be white – not good news. A decision was made to remove the most affected part and discard it and to keep a smaller section containing the main root system. This was then re-planted in a clean pot with new soil, brought inside and placed under full spectrum lighting to encourage growth. Had it been left outside with winter immanent there would be little chance for survival.

The following image shows the tree after being rescued. (1st & 2nd weeks November 2016)

For those who may be interested in this variety of Acer palmatum – amoenum ‘Firecracker’ it is quite prolific in its growth and any wiring done to shape the plant has to be checked regularly. Because, if left for too long the wire will leave ugly scars that are difficult to heal.

The method used to solve this concern was first to attach a wooden stake to the pot held by 3 wires, this takes the strain of the top guy wire holding the upper trunk section down. The other two guy wires secure and stabilise the plant in the pot – a clamp is used to put the required bend in the trunk to add movement. The tension of the wires and clamp were then adjusted. The foliage when strong enough will be tied down to form a crown giving the tree a Literati style. The red leaves at the apex are new growth about a week whereas, the darker red/green leaves are older. The picture was taken on 15/11/2016.

To say this plant has had a traumatic experience is an understatement, its place of origin is not known, but it was found in a corner of a nursery in a neglected condition. Now it sits under full spectrum lighting with other specimens and is checked daily for any signs of infection and thus far there are none. Further update on this Acer will be given in the spring.

Two other Acer specimens acquired in 2016 are the Acer palmatum disectum (Left image) and an (Acer shiraswanum – Aureum) (Right image) as shown below. The (Acer palmatum disectum) is a small, slow-growing deciduous shrub forming a broad, dome of lacy foliage. Its leaves are divided into 7-11 slender, deeply incised lobes, turning deep yellow or orange in autumn. The (Acer shiraswanum – Aureum) is a bushy, slow-growing medium-sized deciduous shrub or small tree. Its leaves rounded with 7-9 lobes are bright yellow throughout the summer fading into orange and finally to red. It is considered as one of the best yellow-leaved Japanese maples. This picture was taken in the spring before the leaves change colour.

Obviously when one looks at these two specimens there is nothing spectacular about them, they look just like any other small maple to be found in many a garden. Nonetheless, one has to keep looking for any potential it or they may have, which is developed through time.

The (Acer palmatum disectum) has 3 trunks each containing movement and one can see that the left trunk has been pulled away from the centre trunk by a guy wire. The reason for this was to widen the plant’s base and to leave room for the possibility of air-layering to take place. No other work including pruning has been done, the tree was re-planted in new soil in a box and will be left alone till the spring.

The (Acer shiraswanum – Aureum) does need a lot of work if it has any potential to become a bonsai. It too was re-planted, but the root-ball was left undisturbed as it was bearing fruit, (Seeds) which have subsequently been collected and are under the stratification process. Work has begun including heavy bending of the trunk via the use of a clamp and wire on the branches. (Shown below) The branches were not pruned but left in their entirety so as not to induce die-back. But will be pruned in the spring when new growth starts to appear as this will give an indication as to the potential style (An informal upright – Moyogi) to be developed over the next few growing seasons. The Acer is quite hardy and some varieties are able to withstand harsh conditions however, these two trees (Acer palmatum disectum) and (Acer shiraswanum – Aureum) are quite young and thus, need protection, hence they have been placed in styrofoam boxes and covered with breathable coco coil and a thin layer of insulation as the November chills have reached -7º Celsius with more to come.

In ‘New material for bonsai’ part two, other specimens will be discussed. (Prunus) a flowering cherry and (Betula pendula) silver birch the latter severely damaged by machinery. Until then BW, N.