Air layering – although not really a grafting method is a common practice in obtaining potential bonsai material that has some substantial growth, but again much depends on the species. The illustration below shows an old deciduous shrub, which may look as potential bonsai material, but has problems for example. Poor branch displacement and reverse taper at the base of the trunk. Nonetheless, a possible candidate is the lower branch on the right. The following illustrations show the air-layering process. 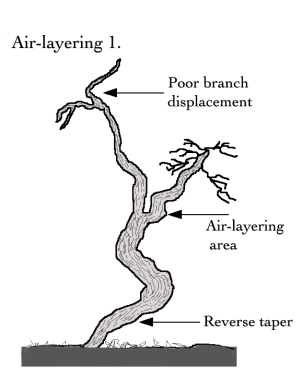 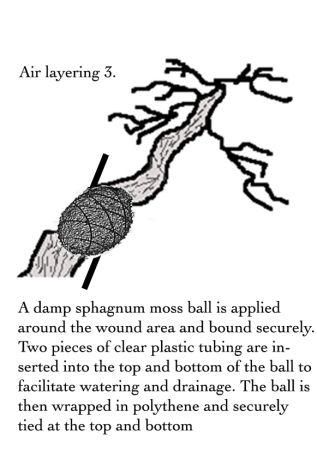 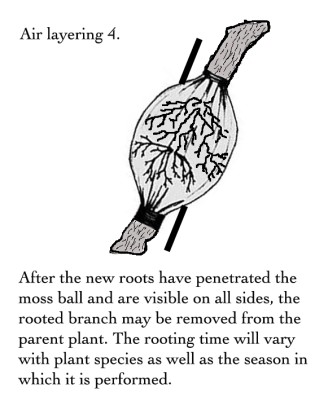 Collecting from the Wild – causes arguments on both sides. Those in favour may argue that species they require can not be found at nurseries or bonsai outlets furthermore, seedlings and cuttings will take many years before reaching maturity.

Here are some thoughts on the issue. In some countries where timber harvesting is part of their economy, vast areas of trees are cut and removed. (Although the land is replanted) These areas will have many trees often damaged by forest machinery, so some horticulturists will ‘rescue’ and remove them and of course permission will have been obtained.

In Scandinavia all roads with the exception of some forest tracks have huge ditches either side, this is the dumping area for the huge amounts of snow and ice, which is cleared from the roads by the snow plough during winter time. When spring comes and the snow has gone, a short excursion along these ditches reveal hundreds of trees bent and twisted during their months of icy confinement.

Such an environment considered as a bonsai enthusiast’s Smörgesboard, will be cut down by giant lawn mowers to keep the ditches free and devoid of vegetation. So the question to those opposed to collecting from the wild is; is it unethical to rescue or harvest these trees (Providing permission has been granted) when they will inevitably be destroyed?

But the biggest opposition to collecting material from the wild comes not only from opponents, but from bonsai enthusiasts as well. Because the novice has no idea in the slightest of how to harvest a wild tree and ends up killing it rather than leaving it alone. For the professional bonsai enthusiast this is probably the most bitter pill to swallow as unprofessional conduct not only harms our reputation, but tarnishes the name of this ancient art.

Collecting material a personal perspective – most of the trees in my collection have come from waste sites and areas designated for development. Other sources available are from home owners bored with seeing the same view are redesigning their gardens. Thus shrubs and trees of different species destined for the scrap heap can usually be had for a polite word. All one has to do is dig them up and cart them away.

Nonetheless, countless hours have been spent scouring various landscapes (Mountains, forests and swamps) all of which have given not only great pleasure, but also a learning curve in the way that nature reveals itself.

My directive when looking for bonsai material from any source is first to obtain permission from the landowner to collect.

If a potential candidate is found, it has to be inspected. Examine the trunk down at the base to make sure there is no reverse taper, look for signs of disease and check the foliage condition. Next inspect the terrain what does it consist of, if there are a lot of large rocks in situ, these will be a problem. Because the tree’s root system may have penetrated underneath and in most cases are inaccessible and digging out rocks can damage the root system.

However, if all seems fine up to this point, the next step is to make a sketch of the candidate and in so doing one is able to see by making a few alterations if there is any possibility of it becoming a potential bonsai. If there are any doubts, then walk away. This method of approach means that (a) you have not disturbed the tree which is most important and (b) you have saved yourself from a lot of hard unnecessary work.

But, if all the signs are positive the next part of the operation is to measure the height of the tree as this will give a good indication of its root area. For example, if the tree’s height is 80cm then the root system will spread out in all directions at approximately this length, if not more. This is not an accurate measurement it is an approximation because all trees are different and much depends on the terrain that it is growing in.

To explain further, a few years ago I found an old weather beaten and scarred Juniper, Juniperus communis its characteristics had all the hallmarks for a potential bonsai. But on inspection it was discovered that this was only one branch, further investigation showed that this particular tree had been growing over rocky terrain and that it’s main root system was over 2 metres away. Although the branch in question had produced roots, these were insufficient to support growth and health, so it was left alone.

One method of collecting specimens if they indicate bonsai potential is to investigate the root system and to ascertain, which roots can be cut and which roots to leave. When the operation has been carried out, the soil is carefully replaced and the tree is left to recover. The collector then returns the following year and checks for new root growth and if possible, repeats the process on the other roots that were untouched. The collector returns the next year, inspects the root system and if all is well removes the tree.

Some may argue that this method is ‘long-winded’ – taking too much time. But the most important factor when collecting from the wild is to ensure that if a potential candidate is found, one has to retrieve of much of the root system as possible otherwise the chances are it will not survive. And this is the problem that the novice bonsai enthusiast fails to understand.

When to walk away – my place of residence is surrounded by forests and in one particular area is a pine Pinus sylvestris L. estimated to be over 200 years old. Its style is a mixture of Sekijoju or ‘root over rock’ and Bunjin-gi – Literati and would be classified as Imperial due to its height approximately 200cm. The tree during its life has suffered many traumatic experiences due to the evidence of natural Shari and Jin, and its trunk is gnarled and twisted. If collected such a specimen would be highly prized among bonsai enthusiasts, but this is one tree to be left alone. Partly due to the cost of excavation and partly due to the amount of manpower required. But more importantly, the health and life of the tree.

Another example of when to walk away concerns yet another pine Pinus sylvestris L. 149cm and classified as Hachi-Uye. It can be considered as a Yamadori bonsai due to its characteristic appearance and age estimated 130 years. But it is growing among large granite boulders requiring substantial manpower and tools to remove. Furthermore, it’s root system will have traveled far penetrating below and through the crevices of the surrounding rocks and thus, would be extremely difficult to locate and retrieve.

During my travels there have been many instances where similar examples have been located and no doubt there will be many more. But, I prefer to leave them where they are, left undisturbed.

Equipment needed for collecting bonsai material – I have been asked this question on previous occasions and as stated earlier, most of the trees in my collection have come from waste sites and land designated for development. For example, old industrial areas where the building/s have been removed leaving just the foundations. And if left untouched, seeds blown by the wind will have rooted in the cracks and crevices and developed into trees. To remove the masonry, a pick axe, long metal bar, heavy hammer and chisels are advisable and the work is quite intense. Of course one still needs the standard tools a spade, fork, trowel, 2 or 3-pronged raking fork, geologists hammer and shears. Other equipment includes a hand saw, plastic bags, cord, tape, cling-film (plastic wrap) water for the specimen/s and most important of all a good pair of gloves.

But much depends on the terrain for example, going over a cliff edge and climbing down as I often did requires a good rope and harness. Only taking the bear minimum of tools because of the weight factor. Some collectors have a winch or two in their kit to aid excavation and to see this method in operation visit youtube where an assortment of examples can be seen.

But in reality selecting tools for excavation is down to common sense, because the collector will know the type of terrain and what is required. But the most important factor to remember is to retain as much of the root ball as possible so that the tree has a good chance of survival. One last item to remember is to count the number of tools in your rucksack when you reach a site and when you are about to leave, count them again…. Yes we have all done it – leaving tools behind.

If readers and/or followers of this blog have comments or questions of what has been written so far, then please feel free to do so and I will respond. Until the next post – bonsai tools, BW, N.