Wiring Bonsai trees can be extremely difficult or relatively easy but much depends on the species of tree and what one is trying to achieve in the design. But it should be remembered that wiring a tree takes time to reach a particular style.

Conifers can be and often are difficult to wire because when wiring to the tip of the branch the wire has to be weaved between the needles to avoid damaged. For example, the Norwegian Spruce (Picea abies) has small needles quite close together. (2–12 mm depending on the age of the tree) Damaged needles are unable to photo synthesize properly restricting growth, which is crucial to the tree’s health. Branches devoid of needles are able to bend quite easily providing care is taken.

Deciduous trees are said to be easier to wire because there is more space between the leaves, but again much depends on the species. When bending deciduous branches, extra care is required because the branch is likely to break at the first point of weakness. For example, branches on a Bougainvillea (Bougainvillea spectabilis) a popular specimen for bonsai are brittle and will break quite easily. Whilst the European Birch (Betula pendula) is quite supple and can be wired without too much problem. But in all cases it is best to research the tree in question before undertaking any work.

In general the wiring of deciduous trees commences when the sap is flowing freely, after the first leaves have attained maturity. (Late May on wards although this may vary according to the climate zone) If the wire is applied too early when the sap is rising, ugly wire indentations or scar marks are the result, that are often difficult to heal over but again, much depends on the particular species. The wire used for deciduous species is aluminum.

In both cases wiring is undertaken to either straighten or bend the trunk or branches of a tree and wire of various gauges or thicknesses are available. The general consensus is that wiring commences at the base, progressing upwards. Meaning that the trunk should be wired first followed by the lower main branches and then the middle and upper branches. Wire should be wound around the branches in coils at an angle of approximately forty-five degrees, allowing up to 2.5 cm between each coil, but can be closer if need be.

The wire should not be wound too tightly as this may damage the bark of the tree, or too loosely as this will be ineffective. Before commencing wiring, it is advisable to gently bend the branch to be wired to test the approximate strength. The wire to be used will be one that bends slightly less easily. If necessary two wires can be applied for more strength. To demonstrate this consider the following image.

With small and medium bonsai Komono, Katade mochi and Chumono and Chiu respectively wiring trunks and branches can be accomplished through time and is not that difficult. But with larger bonsai Omono, Dai and Hachi-Uye the practice becomes more difficult for obvious reasons. Here rubber tape, raffia, splints, clamps and strong guy wires come into fashion and in some cases saw cuts are made into the branch to shape it. These cuts are always on the inside of a bend, because as the branch is bent the cuts close allowing for the cambium to heal.

In wiring bonsai arguably the question most often asked is ‘How long do I keep the wire on ?’ In short, the answer is ‘As long as possible’, but an important note to remember is always check periodically any wiring to ensure it is not biting into the bark. If this appears to be the case remove the wire by cutting it off and then re-wire the branch in question.

The pruning of a bonsai tree is probably the most important single factor in the forming of its shape, perhaps more with deciduous trees than with conifers due to there rather intensive growth. Pruning as such can be divided into three main headings. Heavy branch, General and Leaf pruning.

Heavy Branch Pruning – with trees obtained from nursery sources or from the wild, this pruning can be carried out immediately however, with established trees waiting till the autumn to prune is more convenient as the form or shape of the tree, especially with deciduous trees, can be visualized more easily.

The rules for initial heavy branch pruning are not written in stone, they are more of a guideline. Having decided what the material or plant’s potential may be, one can start work. But before brandishing the shears, a good tip that some bonsai enthusiasts undertake, is to either take a photograph, which can be downloaded to a computer where the style can be designed via a suitable program, or draw a sketch of the plant. Doing this allows you to finalize the design.

The illustration below shows a plant selected to be grown as an informal upright. (Shakan) Working from the bottom of the tree, a low branch protruding at the front has been removed, as has the opposing branch above it. Further up, the tree has developed a cartwheel effect. Meaning that more than two branches appear at the same height on the tree. In this case two branches were removed. At the top, the branch on the right had possibly been damaged at some point in time, and rather continuing to grow to the right, had grown across the front of the tree and this was removed. The illustration shows the effect of this initial pruning.

Different styles of bonsai require different forms of heavy pruning, as a general rule, dead, damaged, or diseased branches are removed. But with conifers such deadwood is formed into Jins, which gives the tree a more aged-look. Jins are branches that have been stripped of their bark and cambium layer then coated in lime sulphur, which bleaches the branch. With heavy pruning, there will be wounds and these are susceptible to disease. Some bonsai enthusiasts advocate the use of expensive cut pastes to seal the wounds, some use petroleum jelly (Vaseline) a fraction of the cost. Whilst others do nothing allowing the tree’s natural ability to heal itself.

General Pruning – is carried out throughout the growing season and with most varieties it is started almost immediately they begin putting on the new season’s growth. New growth of all trees can be pinched or removed with the fingers. But if a tree is left until this growth has begun to lignify or harden off, then sharp scissors will be required. Pruning is done to maintain and improve the shape and symmetry of the tree and ramification. It is also necessary for the health of the tree, because a correct balance has to be maintained between a relatively small root ball and top growth. The following illustration shows pruning on a variety of species. 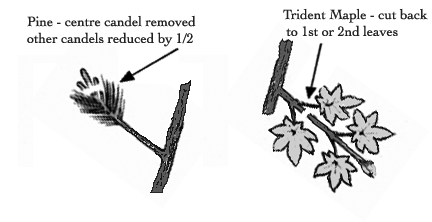 Leaf pruning – is a method of increasing leaf coverage and fine twig-lets, it also assists in reducing leaf size. However, it should only be carried out on trees that are healthy and are growing strongly. In some cases more mature trees are less vigorous in their growth for this treatment. June (Depending on the climate zone) is the time when the all the leaf except for the petiole (the leaf stalk) is removed. After a period of time, approximately 2 to 3 weeks, new leaves and branches will form. But do not remove all the tree’s leaves, at least half must remain as they are needed for photosynthesis in providing nutrients to ensure a strong healthy root system. In addition, it should be noted that leaf removal is restricted to deciduous trees, never with evergreens, flowering or trees bearing fruit.

Maple – the right image shows a healthy branch where all the leaves are removed
the left image depicts a weak branch of an old tree where only half the leaf is removed
New buds will appear between the base of the petiole and branch.

In the next post we discuss the issue of bonsai soils. Until then BW, N.