Trunk and root placement –  although the majority of bonsai are planted directly into soil, other styles exist for example, trees planted on rock. A mountain scene – Saikei – uses rock formations and planted with ‘live’ specimens, which is akin to the ancient art of Bonkei. However, according to the founder of this art form Toshio Kawamoto these are living landscapes and not bonsai in the true sense of the word. Nevertheless, rocks are used in bonsai styling for example, ‘root over rock’ – Sekijoju where the root system encompasses the rock. And Ishizuki – ‘root clinging to a rock’, where the root system is less dominant as shown below.

Multiple trunks – considered the most common forms of bonsai feature a single tree however, there are other styles that incorporate more than one trunk and these are categorised by the number of trunks within the style. For example, two trunks on a ‘single set of roots’ known as Sokan are visibly joined at the base, but separate further up. Normally, one trunk’s girth is larger and is taller than the other. The two trunk’s branches extend outwards right and left, slightly to the front and behind, but do not overlap or intertwine.

Other styles of multiple trunks from a ‘single root’ system include, a clump style Kabubuki where trunks have grown from the stump of a tree that has been cut off below ground level. In this particular style the amount of trunks can vary, but should always be in odd numbers; three, five, seven, and nine.

Similar to the clump design is the Turtle style Korabuki where the trunks rise from a raised root system creating a ‘Domed’ or turtle back shape.

Another style where trunks have grown from a ‘single root’ system is the straight raft design known as Ikadabuki. This design is said to simulate a natural occurrence such as a tree fallen over losing its foliage on one side, but continues to grow giving the appearance that all the remaining branches are separate trees although they are in a straight line.

Similar to the raft style is the sinuous raft, Netsunagari. The difference between these two styles is that the straight raft is by its definition straight where the sinuous is curved or bent. Hence the trees do not appear in a straight line.

Multiple root styles include individual trees usually from the same species having their own roots for example, a two tree design is called Soju. As with the twin-trunk style Sokan, the two-tree style is much the same, the only difference between them is a single root system Sokan and more than one set of roots Soju. In addition, the amount of trees in this style can vary for example. Three trees – Sambon-yose, five trees – Gohon-yose, – seven trees – Nanahon-yose, – nine trees – Kyuhon-yose up to a small forest – Yose-ue.

Other bonsai styles include Literati – Bunjin-gi. A style originating from the Chinese brush paintings similar to those found in the ancient text. (The Mustard Seed Manual of Painting) It depicts a tree with a contorted bare trunk with minimal foliage at the apex. The design is said to represent a tree that is growing or surviving in severe conditions.

The Broom design – Hokidachi often applied to deciduous species where the trunk is a formal upright with branches radiating out from all directions with fine ramification. It is usually in a dome or ball shape.

Wind swept style – Fukinagashi depicts a tree subjected to extreme conditions for example, an exposed on an open plain or mountain side constantly buffeted by strong winds. The trunk can be an informal upright, slanting or semi cascade, but all the fine branching and foliage will go in one direction. 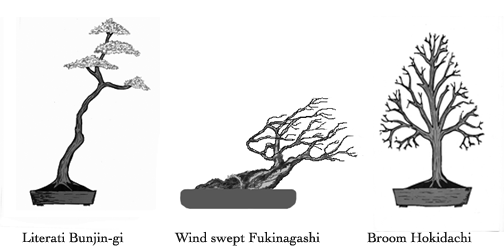 The methods of styling discussed in these two articles are but a few of the many that are in existence, too many in fact to be described on this blog. Nonetheless, it is hoped that those mentioned will assist the designer when contemplating how to style a particular tree. These styles are not mandatory, because like many other forms of art they change through time. In addition, not all trees have the potential to become bonsai, their shape, height, trunk and branch configuration may not be suitable, to styling therefore, are best left alone.

In bonsai there many styles both old and new and the range of material used is relatively wide for example. Bonsai include fruit and flowering species such as Apple – Malus and the Chinese Wisteria – Wisteria sinensis with striking results. For you the artist there are no bounds, because at the end of the day it is you who decides how your bonsai is designed. Nonetheless, some argue that a tree subjected to weird shaping and pruning, is unnatural and plastic looking and does not resemble its wild counterpart.

To counter this perspective, many enthusiasts prefer their trees to have a natural appearance as would be found in nature and is not nature the best artist there is. As previously mentioned, in bonsai what we try to do is mimic what we see in nature, but in miniature form to the best of our ability. So perhaps these words from Bonsai master John Y. Naka are very appropriate. “Don’t make your tree look like a bonsai, make your bonsai look like a tree.”

In the next post we look at styling – wiring and pruning a general perspective, until then, BW, N.