Bonsai styles are normally categorized by different criteria, these include: Trunk orientation, Trunk and bark surface, Trunk and root placement and Multiple trunk formats. Within these categories each particular style has its own descriptive terminology. To many, committing this to memory may seem a rather daunting prospect. However, this article will attempt to simplify matters by explaining the descriptive terminology most commonly used.

Trunk orientation – the terminology used to describe a tree’s orientation is based on the relationship between its apex and trunk for example. If a tree’s apex is directly in line with its trunk, these are referred to as ‘Up-right styles’. A tree with a straight trunk is designated as a ‘Formal up-right’ – Chokkan. A curved trunk with its apex in direct line becomes an ‘Informal-Up-right’ – Moyogi. Should the tree’s apex be to one side of the trunk’s main centre, it is referred to as ‘Slanted’ – Shakan. Trees that have their branches orientated below the point where the trunk disappears into the soil, are known as ‘Semi cascades’ – Han kengai and ‘Full cascades’ – Kengai. Other styles for example, an ‘Upright’ with many branches radiating from all directions is called a ‘Broom style’ – Hokidachi and a tree having ‘Two trunks’ would be referred to as Sokan as supported by the following images 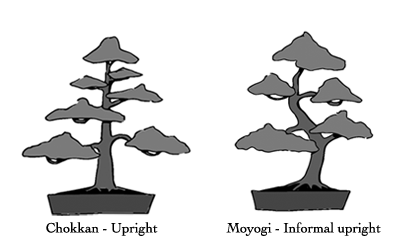 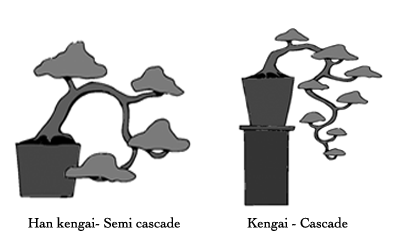 To give further explanation, we will look at these styles in more detail.

‘Formal upright’ – Chokkan – has a straight upright trunk tapering to a point. Its branches are thickest and broad towards the base of the trunk, but diminishing in length and thickness as they progress towards the apex. This gives the appearance of a triangular perspective when viewed in addition, the tree’s roots called Nebari should be visible.

‘Informal upright’ – Moyogi, takichi – is similar to the formal upright in style, the only noticeable difference is that the trunk is curved. Branch configuration may incorporate visible curves to accentuate the trunk’s movement and are found only on the outside of a trunk’s curve, never on the inside. However, evenly spaced branches may be difficult to align because of the irregularity of the trunk’s shape.

‘Slanting’ – Shakan – gives the appearance of a formal upright, but angles away. The slant can be gentle or pronounced with the apex either to the left or right. For example, if a tree is slanting to the right from the viewer’s perspective, the branches on the left will be more prominent. The reason for this is to give the tree balance and to eliminate the impression that it is about to fall over.

‘Cascade’ – Kengai – a design to mimic trees that grow on the banks of rivers, rocky crevices or outcrops. The trunk close to soil level normally has an immediate curve, which in some cases can be severe depending on the species. The apex of a full cascade style is normally below the base of the container and to accentuate the style, these specimens are usually found in tall containers.

‘Semi cascade’ – Han-kengai – this design is similar to the full cascade, the only major difference is that the apex of the tree is either just above or just below the rim of the container. It should not exceed these parameters, otherwise it is neither a semi or full cascade.

‘Multi trunk cascade’ – Takan-kengai – a style that applies to any cascade design where two or more trunks cascade downwards.

Trunk and bark surface – contain a number of descriptions referring to a trunk’s shape and its bark texture for example. A twisted trunk is called Nebikan, a tree containing a vertical split or hollow is Sabamiki and a tree with a hole in its trunk is called Uro found more on deciduous trees than conifers.The dead wood styles identify trees with prominent dead branches or trunk scarring and are common to conifers than deciduous. A tree that has had part of its bark removed from the trunk is referred to as Shari and a tree that has had all of its foliage and bark removed from some branches is known as Jin. The following images support these descriptions. 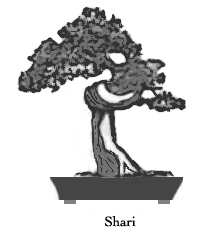 To give further explanation, we will look at these styles in more detail.

Nebikan– this particular twisted trunk style can be found in both coniferous and deciduous species. It is able to present to the viewer the appearance of age. The technique of trunk shaping and the amount largely depends on the species, but should be done gradually as the tree has to recover. In addition, the branch and trunk configuration incorporated in the design have to be in balance.

Sabamiki – is a ‘hollowed’ or ‘split trunk giving the visual effect of lightning damage weathered over time. The technique involves removing the bark from the trunk and carving out the wood to produce a deep wound. The hollowed area can start at the base of the trunk ending part way up tapering up to a closure or in reverse. But in applying this technique, care must be taken not to interrupt the flow of nutrients in the tree, or the above branches will die. When the work is completed, all exposed wood is treated with a preservative.

Uro – can be applied to all bonsai, but is normally found on deciduous trees where a branch has either died or been removed leaving an indentation or scar. Such a wound takes time to heal with no guarantee that the end result will look ascetic. Therefore, in most cases the wound is ‘hollowed’, which can add character to the tree. Old collected bonsai species will have Uro as a result of damaged from the elements and from grazing animals.

Shari – is deadwood on the main trunk of the tree usually running vertically on or near the front in order to be visible. This shallow wound reveals the ‘non-living’ portion of the trunk, but is still surrounded by living bark. Shari in natural circumstances can be caused by a branch being ripped off by a lightning strike stripping the bark from the trunk below, or damage from another external source. If the amount of damage is severe including other dead branches the tree is classed in the sharamiki or driftwood style, due to its silvery, weathered driftwood appearance.

Jin – is used on branches and or the top most part of the trunk and meant to depict age. Jins in nature are formed because the tree has had to struggle to survive in harsh conditions for example, extreme temperatures, lightning and wind. Creating Jin on the top most part of the trunk can give the illusion of a shorter tree and assists in distributing more energy to lower branches. These tend to grow more quickly and help increase the trunk’s diameter, reinforcing the illusion of age. When applied to branches, the Jin technique increases the illusion of age.

Before we conclude part I, there is another style in this in the driftwood category, which is Tanuki. But this technique is not currently accepted as part of the Japanese bonsai tradition and would not be displayed at a formal Japanese bonsai show. Nonetheless, many bonsai growers outside Japan consider tanuki as an acceptable technique. Arguably, the main reasons why it is employed is because, (a) creating Shari and Jin on ‘live’ specimens takes considerable time and patience – one mistake can result in the loss of the tree. (b) Obtaining a natural driftwood style bonsai is rare and should an owner have one for sale, then a rich aunt or a lottery wind fall would certainly help, But if these sources are fruitless, be prepared to take out a second mortgage. Hence the reason why Tanuki is an alternative solution, because it reduces the amount of years to produce a bonsai specimen in the traditional way and expenditure is minimized.

Tanuki is the Japanese word for Raccoon dog (or Badger as some in the west prefer to call it) and this animal in Japanese folklore is responsible for playing tricks on people, so when a tanuki is involved, nothing is quite what it appears.

The Tanuki technique is the marriage of a living tree affixed to a interesting piece of deadwood (often from an entirely different species) with the idea of creating a driftwood style composition. A technique known as ‘Phoenix Grafts’ (after the mythological Phoenix, which arose from its own ashes)

The combination of live and dead wood was usually restricted to coniferous varieties resulting in some surprising and effective displays. But now is a common practice with deciduous varieties. Nonetheless, combining live and dead wood is not that easy to accomplish if one wishes the final outcome to have a natural appearance. There two common approaches of how this technique can be accomplished, (a) by surface fixation and (b) insertion method.

Surface fixation – can be considered as a quicker method of achievement, because the ‘live’ specimen is affixed directly on to the deadwood held by screws or by wire. But the result at best is ascetically poor, because (a) the wounds created by the fixings although will eventually heal will still be visible as callouses. Furthermore, the screws used unless of a non-corrosive material can effect the health of the tree. (b) Using wire will leave indentations in the ‘live’ wood, which can be difficult to disguise. In addition, to make the ‘live’ wood adhere to the deadwood, a small sliver of bark (depending on the trunk thickness and species) has to be removed on both sides of the ‘live’ wood so that new growth will eventually roll over creating a bond between ‘live’ and ‘dead’ wood.

Insertion method – requires a more delicate approach as it involves the use of extremely sharp carving and or power tools and one slip can result in catastrophe.

Once a ‘dead’ wood candidate has been selected, it needs to be treated to remove any decaying material and bacteria potentially harmful to the ‘live’ wood partner. The deadwood in the images below was boiled for approximately 20 mins, allowed to dry then treated with preserver and left for 2 years.

Having determined which would be the front of the deadwood, the girth of the ‘live’ specimen’s trunk was measured. A channel was cut into the rear using a ‘key-hole’ approach. Meaning that the channel below the opening was widened further. The reason for this approach is that once the ‘live’ wood is inserted, it would be allowed to grow locking itself within the channel. As the ‘live’ wood develops, its trunk will eventually fill the channel creating a uniformed bond with it’s host. When fully developed, a sliver of bark (2-4mm) on both sides of the ‘live’ wood will be removed for the bark to roll over allowing adhesion to take place.

As this is a relatively small tree, (approximately 25 – 35cm) its trunk is no thicker than a standard pencil. But it had to be made pliable by bending gently back and forth so it could be manipulated into the channel. Using screws because of potential damage was not an option. The solution was to keep the ‘live’ wood in situ by binding raffia around both woods at strategic points taking care not to cover any nodes that will develop into branches. The image below shows the combination of a ficus ginseng with its deadwood host. (Work undertaken 27/02/2016) 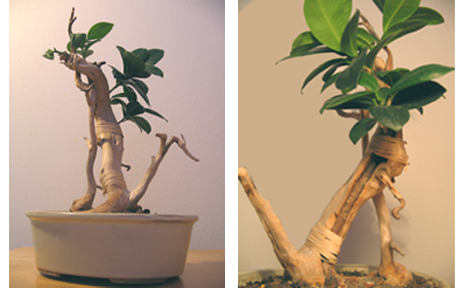 To some the method used in this experimentation may not be to everyone’s taste, some prefer to use screws or wire to secure their ‘live’ and ‘dead’ wood bonsai potential/s. But as stated the argument from this perspective is that such securing methods leave unwanted scaring and can be harmful, detrimental to the health of the tree, something to avoid.

In part II we continue the discussion on bonsai styling, until then, BW, N.